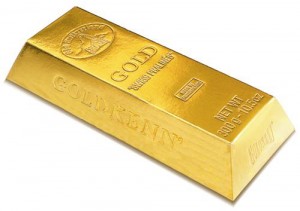 if  you can trust the banks to hold your money responsibly, following recent revelations, thats fine, but there’s something about gold that appeals to many people. Let’s face it, the intrinsic value of gold is simply the price someone [else] is prepared to pay for it. However, that said, it would be nice to have
a 1 Kilo 24kt 999.9 pure bar (around GBP32,000 – GBP33,000 to buy at the moment) or even a few 22kt Krugerrands (around GBP1,000 – GBP1,200 each just now) tucked away under the floorboards (or safe deposit box may be best) to bring out on a rainy day – or bring out any time just to touch and admire.

It’s amazing, isn’t it ? all the countries currently implementing austerity measures with many of their citizens suffering quite badly and they’re sat on enormous gold reserves.

Take Portugal, for example – currently sitting on gold reserves worth more than 16 billion euros, more than 382 tonnes.
That’s more than the reserves held by the UK and almost double the amount held by South Africa and Australia together, and they’re major gold-producing countries !
You only need to read the [local] newspapers or view the many reports available on the internet to get a good idea of the problems experienced – right now and probably for some time to come – by it’s citizens. Yes, there are lots of people in Portugal with a lot of money but there are more without. For outsiders, it’s a great time to buy that holiday property wherever is popular at the moment, they will find an abundance of bank-repossessed properties to choose from; they will also find a near-corresponding number of families, individuals or couples looking for cheap rental accommodation and stuck with a continuing debt the banks seem unwilling to rationalise.

It’s been on the cards for a while – or at least a consideration for some policy-makers in the eurozone – to start using gold reserves in a ‘creative’ way. Perhaps not to sell, that could end up in disaster, but to utilise a percentage of the gold reserves as security or provide a [unique] guarantee to enable borrowing [by the respective country] at reduced rates.
Sounds like a good idea to me and probably easy to set-up; after all, it has been done before.

……… Hmmm, a gold finger, it would solve a lot of problems, but create so many more !
It would be just too easy, wouldn’t it ?

Wish I had a gold finger

This entry was posted in Fun, Chat & Things. Bookmark the permalink.